MY YOGA STORY....When Yoga Found Me

Over 20 years ago, at the Phoenix and Dragon new age shop in Atlanta, I had a psychic tell me that, “I would someday be working in a field that everyone needed but did not realize they needed.” At the time, I had just graduated from college with a degree in Journalism, was a newlywed and about to move to the armpit of Texas while my husband began pilot training. I pondered over this “job” assuming it was something in technology – maybe some new development or cutting edge business. Who knew it was going to turn out to be one of the oldest systems for well-being known to man! In the store I was drawn to a ring that had a symbol on it that I had never seen before. It was the OM symbol, and though I didn’t know what it meant, I bought it and wore it nonetheless because I liked the look and feel of it. I do not believe that any of this was coincidental. I have been wearing that ring ever since.

Flash forward to 1997. My husband and I were living in Germany at a time when my life revolved around travel and fast times. I have always been a bit wild! In my teens and beyond, I loved to party with my friends, smoke cigarettes, drink too much, eat junk food and sweets, and stay out way too late. After about a decade-plus of this behavior pattern, I realized that a part of me continued to feel empty inside, no matter how many friends I had, or how much fun I was having. I self-soothed with negative behaviors that often left my body and mind spinning the next day. I was thirsting for something more. My body, mind and soul needed true nourishment.

Fortunately, my husband (and my guru in many ways!), reminded me of the benefits of yoga and meditation, so I decided to give it a try. When we first started dating, he did not own a TV, practiced yoga, was a vegetarian and meditated regularly. He was the most calm and spiritually in tune person I knew. At that time he was an ideal partner to balance my untamed energy.

I began practicing with a video in our living room and after polishing some tough poses and learning how to breathe (for the first time in my life!), my body and mind craved more. I found a yoga studio in nearby Luxembourg that taught classes in English, and from then on, I was hooked! Within two years of beginning my practice, I began to turn my life around. The wild child was still there, but I began to grow in ways that I can only attribute to my yoga practice. Then we had our son, Jaxon, and the challenges of motherhood were a roller coaster ride. But inside, I found a place of strength and solace that helped to see me through the tough times and value the beauty of present living. Eleven years after his birth, I was riding another trauma coaster, this one called Divorce. I thought I would die from the pain and the loneliness, but yoga was my salve and my salvation. It brought me back from the rim of hell once again to the land of living and THRIVING. But I have jumped ahead slightly...

Once we moved back to the States, I purchased a gym membership that included yoga. Never before had I voluntarily gotten up at 8 am on a Saturday to exercise, but yoga reeled me in. One day, my yoga teacher took me aside and encouraged me to become a yoga teacher. I loved yoga. It inspired me, and I wanted to help others begin their journey, so I took her advice and began my teacher training.

Another two years later, I was a certified yoga teacher and began teaching classes at churches, schools, gyms - wherever I could find an audience. And then we moved to Camden, SC, where I could not find any yoga. I took some “yoga-lite” stretching classes at a gym, but I missed my teachers. I searched for the food for my soul, and this time I found it inside myself. I recognized the need for a studio in Camden, so, after a lot of prayer, contemplation and planning, Blue Dog Yoga was born!

Here we are many years later, and though Blue Dog Yoga has had some changes and reorganization, it is still a thriving community of yogis and yoginis on a mission to change the world one breath at a time. More and more people are finally realizing that this is the practice that everyone needs! I wish I had that psychic’s name so I could tell her how right she was: I am indeed working in a field that every body, mind and spirit needs! I look forward to sharing this path with you. 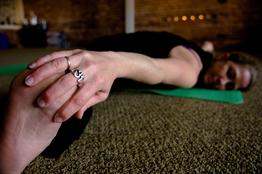 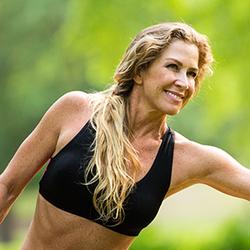 YOGA & WELLNESS for a balanced life!

A little slice of nirvana in the South.